This is who is most at risk of losing a job due to Covid-19 lockdown, BusinessDay

Opening up data for social well-being in South Africa DataFirst 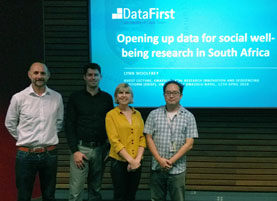 In April, Lynn Woolfrey, manager of DataFirst's data infrastructure and services, was invited to present a guest lecture at KRISP (KwaZulu-Natal Research Innovation and Sequencing Platform) at the University of KwaZulu-Natal’s Medical School.
KRISP researchers are linking socioeconomic data from DataFirst with health data. Lynn has worked on the Wellcome Trust's health data linkage project and discussed how DataFirst has enabled such linked data for innovative research. The presentation stimulated a discussion around greater commitment among public health researchers to opening up their data for ongoing use to the benefit of science and society.

DataFirst has been awarded the CoreTrustSeal trusted data repository certification. We are the only internationally certified African repository. Read the article. 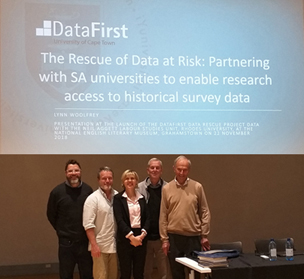 On 22nd November DataFirst celebrated the successful rescue of data from two historical SA surveys at a launch at Rhodes University in Grahamstown. The data rescue effort was supported by partners, The Neil Aggett Labour Studies Unit at Rhodes University, and the libraries of the RU, UCT and UKZN. Data rescue involves identifying data that is at risk of loss through deterioration, neglect or closure of archives, capturing the data in digital format for long-term preservation and disseminating the data for reuse.

The data rescued by DataFirst comes from two Apartheid-era surveys. The first is a government survey of villages in Keiskammahoek in South Africa conducted in 1948-1950. The second is a 1980-1981 survey of households who were victims of apartheid-era forced removals, conducted by an NGO, the Surplus People Project. The records from these surveys were in storage for decades and were in danger of being lost due to physical decay. DataFirst recovered this rich historical data for new analyses. The data rescue project was part-funded by the Mellon foundation.

Lynn Woolfrey, DataFirst’s Manager, and Takwanisa Machemedze, researcher, were active participants at International Data Week 2018, held in Gaborone, Botswana on 5-8 November 2018. IDW is an annual gathering of data experts from around the world and incorporates the SciDataCon conference and meetings of data interest groups. Takwanisa did a presentation in the session titled: From Galaxies to The Global Goals: using Data Skills for Development. The session was hosted by the Office of Astronomy for Development. The aim of the session was to bring together astronomers and social science researchers for them to dialogue on how they can work together for the social good. Takwanisa’s presentation was on Data for Development and was based on their working paper on the application of remote sensing (night light) data to assess rural electrification in South Africa.

This year’s event was sponsored by ICSU’s CODATA and the World Data System, the Research Data Alliance, the Academy of Science of South Africa and the University of Botswana. Lynn’s participation was sponsored by the CODATA/ASSAF African Open Science Platform, as she is a member of their Technical Advisory Board, which held their meeting before IDW2018. Lynn is a committee member of CODATA South Africa, and of the Research Data Alliance’s Data Rescue Interest Group and attended meetings of the latter at IDW2018. Lynn also presented in two sessions of SciDataCon 2018. The first session was on Improving Data Repository Trustworthiness, in which she described how DataFirst became the only internationally certified data repository in Africa, awarded the Data Seal of Approval from 2014-2018 and the CoreTrustSeal in 2018. The second session was on Best practice for data stewardship in African institutions organised by the University of Botswana.

The African Centre of Excellence for Inequalities Research (ACEIR) was launched under the banner of the African Research Universities Alliance (ARUA). UCT will host the southern African node, drawing on the expertise of DataFirst to constitute ACEIR’s data centre.   Read the article.

Evidence shows that satellite data is a useful tool for tracking improvements in infrastructure access and service delivery in rural areas. Article by Taryn Dinkelman on research done with Martin Wittenberg in the Agincourt area. Read the article.

DataFirst wins the Data for Research Award at the annual NSTF-South32 Awards.

The NSTF-South32 Awards awards, known in the South African research community as the ‘Oscars of science’, recognise and reward excellence in science, engineering and technology, and innovation in South Africa. Professor Martin Wittenberg, director of DataFirst, was there to receive the award. “I am proud that DataFirst has made it much easier for young academics to obtain data in a form that is usable for research,” he told the Mail & Guardian. “The data that we distribute is at the core of many of the debates about transformation and development. Furthermore, we run numerous courses to give researchers the skills to be able to do high quality work.” In his acceptance speech, Martin thanked the National Science and Technology Forum (NSTF) for recognising the importance of data for research.

Here are some links to articles about the awards:

Data - the start and end of effective research

The postgraduate diploma in survey data analysis for development was introduced in 2016. It aims to to improve the skills of graduates so they are able to produce the high quality data that is so fundamental to policy innovation, implementation and monitoring. Read the article.

Some of our 2016 graduates with Prof. Murray Leibbrandt.

Aiming for a Moving Target: The Dynamics of Household Electricity Connections in a Developing Context by Tom Harris, Mark Collinson and Martin Wittenberg.

Contact Us: This email address is being protected from spambots. You need JavaScript enabled to view it.
Track query: support.data1st.org

In Memory of Francis Wilson

Can SA's umemployment figures be trusted? - Watch the interview